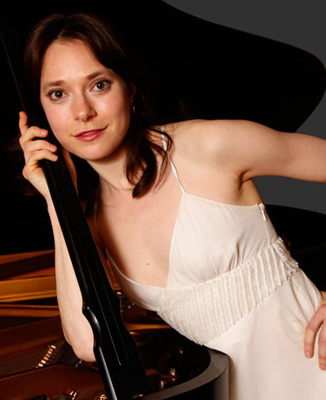 Miss Fader is the artistic director of and performer on "Melody and Company Chamber Series" which has recently won grants from the Queens Council on the Arts as well as the Puffin Foundation. Melody released her first commercial album, Music of Frederic Chopin in February 2012 on Centaur Records. It can be purchased and downloaded on Amazon and iTunes,as well as other music sites. For two seasons, Melody was the company pianist, and also played a piano solo for one of the ballets in the repertoire of Dance Theatre of Harlem. She toured extensively with DTH around the US as well as St. Thomas and Jamaica. Her passion for interdisciplinary work has lead to performances with the Buglisi Dance Theater and she is a resident musician with the New Chamber Ballet, which performs regularly at New York's City Center.

<[>Miss Fader has been a prizewinner at the Coleman Chamber Ensemble Competition and the Aspen Concerto Competition, leading to solo appearances as well as chamber music performances throughout the U.S.

Miss Fader earned her Bachelor of Music from the Eastman School of Music, and Master of Music in Collaborative piano at the Juilliard School where she studied with Margo Garrett. For more info, please go to: www.melodyfader.com